This is not acceptable.

Eliminate or minimize the effect on your dog of poor judging techniques.

In this “Don’t let this happen to you” I discuss the problem of poor judging techniques and the role we as handlers can play in eliminating or at least minimize the effect it has on our dogs.

Let me say at the outset, that after 48 years of exhibiting pure breed dogs to judges from this country and around the world, it is my experience that the vast majority have approached and handled my dogs with skill, professionalism and emotional intelligence.

However, there have been a notable few that have approached their task as a licensed judge in completely unacceptable ways.  Some examples of these incidents have been wrenching the mouth so wide and actually having one hand in the mouth, another so much force while conformation judging caused the dog to yelp and a common example when judges are not fit enough to adjudicate using the dog as a crutch to get to their feet and another standing in front and staring to the point of unnerving the dog.

By the time a relevant kennel authority has seen fit to award a person a licence to judge, the exhibitor should be justified in expecting that the person who they are exhibiting to possesses basic common sense when it comes to approaching and physically handling dogs.

The great problem we have as exhibitors is that, unless pre-warned, we have no idea whether the next judge we put our dogs to could be one of these people with poor judging techniques until after we have entered the ring.

As a consequence, it my belief that the only way to minimise our dogs exposure to an unpleasant experience of this nature is to handle and present our dogs in ways that mitigates this kind of risk. So that even after our dogs have been exposed to the indignity of inappropriate judging behavior their confidence is maintained through our leadership.

In this series, I’ve put together a few simple tips that you can use to allow the judge to perform their task while protecting your dog from the less-than-ideal examination techniques of some judges. 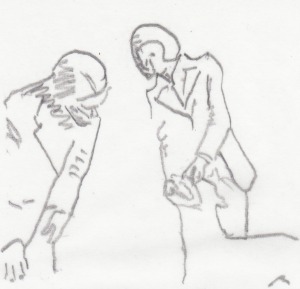 No rules, to stop handlers showing the teeth.

In previous blogs I have expounded my philosophy of two powerful reasons to show the teeth yourself and not the judge; one is hygiene and the other is reassurance. This action by the handler virtually eliminates the judge’s hand over the dogs head or the need for judges to physically be involved instead of just observing.

When the judge leaves the front of your dog and starts down the shoulders and beyond, your dog now loses its defense mechanism (its teeth) which is at the front. So it is understandable that unless well rehearsed in this procedure dogs will be apprehensive and anxious, this is even exacerbated when a judge is rough and excessively forceful. 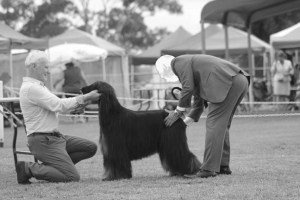 Bring the dogs attention back to you.

To reduce and in most cases eliminate this apprehension, as the judge leaves the front of the dogs vision, if replaced immediately by the handler coming from the side now round to the front and attracting the dogs attention away from the retreating judge back to you the handler the dog is reassured that everything is cool and they do not have to worry because you are there.

Handler Performance. When these handling procedures are well learnt and honed to smooth action, the effect of clumsiness of judges on our exhibit can be at worse reduced and at best be eliminated.

How about you? Have you had any experiences of your dogs being roughly handled by judges? How do you manage these situations?